Wow, what a difference a day makes. Ronnie woke up feeling awesome. He could move his right foot up and down, which he hasn't been able to do for quite a while. It was pretty exciting, I have to say.

We went outside for a visit with some of the other patients and carers that had gathered in the little pod. We exchanged war stories. Some are having a tough time now because they were in a later group, experiences that Ronnie has already been through. The fresh air was invigorating for him.

He actually asked for a omelette for breakfast, so when in Rome! I made it with shredded chicken, fried onions and cheese and a touch of salsa. It was quite good.

The little stubble on his head are discreetly falling out. But it doesn't matter because he is handsome with hair or without. Now we will have 3 baldies in our family, Joining both my brothers  Stevie and Billy.

Take every chance you get in life, because some things only happen once. 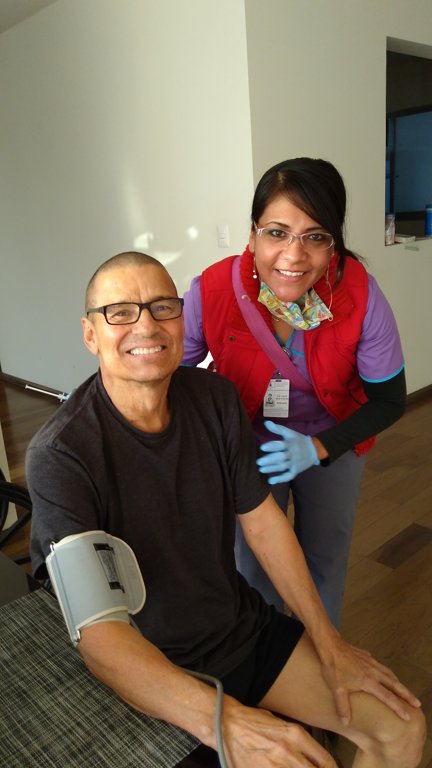 Ronnie with his nurse Laura this morning.

Dr. Ruiz, is the 2011 alumnus of the year from the Mayo Clinic in Rochester Minnesota. He was also awarded the Distinguished Student. This appointment is the highest recognition awarded by the Mayo Clinic.

Since the foundation of the Mayo Clinic Distinguished Alumni award, only 85 Doctors out of the worlds 10,000 alumni have received it.

We are looking forward to meeting this amazing Doctor!

Created with Mozello - the world's easiest to use website builder.
.