We had a day off today, we did something different - we relaxed ha ha .  Ronnie's stomach is still not right. Dr. Priesca called and says it sounds like it's from all the medication he has been on. He is taking more stomach medication to try to fix the problem.

Tomorrow the nurse or doctor comes for the last vial of blood. Yeah! No more pin cushion. The blood will be tested for his white blood cell counts, and if all is well he will be given his last infusion, which is Rituximab. This is a cancer drug given to destroy any T or B cells.

We have had concerns from people saying Ronnie could be in danger of contacting PML which is a disease in the brain (There are MS drugs that have a higher likelihood of causing this than the dose of Rituximab he will be given).  Dr. Ruiz told us you have a better chance of getting struck by lightening while here in Mexico than contacting PML. He's the greatest!

Rituximab is also being used off label for MS patients in the United States.

When we come home, Ronnie will also be getting an infusion of Rituximab every two months for the next year. This is precautionary, as Dr. Ruiz feels its important to mop up any lingering cells that could cause a relapse. Thankfully, Dr. Foley at Juravinski cancer clinic in Hamilton has agreed to follow Ronnie and prescribe the drug. He is actually looking after a young lady from Toronto that was in Mexico in December.

I May not be there yet. But I'm closer than yesterday! 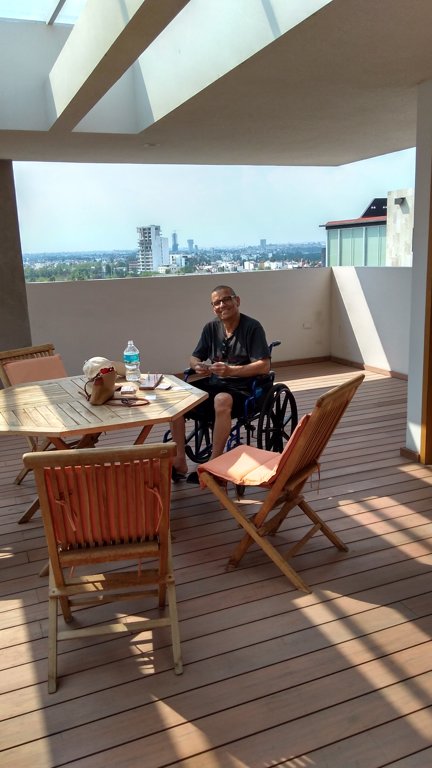 Ronnie and I enjoying a little down time this week on the roof top. You can ask him who got skunked playing cribbage (and It wasn't me).

Dr. Ruiz, is the 2011 alumnus of the year from the Mayo Clinic in Rochester Minnesota. He was also awarded the Distinguished Student. This appointment is the highest recognition awarded by the Mayo Clinic.

Since the foundation of the Mayo Clinic Distinguished Alumni award, only 85 Doctors out of the worlds 10,000 alumni have received it.

We are looking forward to meeting this amazing Doctor!

Created with Mozello - the world's easiest to use website builder.
.